What You Can Expect From Hawthorne Stud

Located within an hours drive of Brisbane, Hawthorne Stud is situated on the fertile creek flats near Boonah, Queensland. Hawthorne Stud was founded in the early 1990’s as a need was identified for high performance equine athletes. Hawthorne Stud is well on its way to achieving these goals with the stud’s progeny achieving accolades at the state & national level on the polocrosse field & show arena.

From the time a mare arrives at the stud, she is cared for as if she was one of the horses owned by Kent & Libby. This is evidenced by the 160 acre property with well maintained, safe facilities. The mares are run on irrigated improved pastures and crops with supplementary feeding. This ensures the best possible opportunity for breeding and maintains a healthy mare & offspring.

Hawthorne Stud works closely with a team of excellent equine reproductive veterinarians, giving your mare the best possible care & expertise. This level of care and facilities assists in ensuring the foals are given every opportunity to become the elite equine athletes of the future.

After growing up with horses all of his life, it was only natural that Kent rode in local campdrafts & followed his fathers lead onto the polocrosse field at the tender age of seven. Kent was always encouraged by his parents, Barry & Betty as well as his grandparents, Harry &Marj Hilton. This encouragement helped kent earn his first Queensland Polocrosse jersey in the under 16 team at the age of 11. Kent has continued to dedicate his life to horses & Polocrosse, always improving his own skills as well as his horses. This has lead to a prestigious career on and off the Polocrosse field, representing South East Queensland, Queensland & Australia.

Libby has always been surrounded by animals, growing up in Western Queensland on a sheep & cattle property. Farm life and animals have always been close to Libby’s heart, after school she completed studies in Applied Science, majoring in Animal Husbandry. This lead to more time at home helping on the family farm and then to a career as a Veterinary Nurse.

Kent & Libby started breeding horses in the early 1990’s when their foundation mare, Hawthorne Elle was bred. Hawthorne Elle is by Ablo out of a thoroughbred mare, Alterfire. From there Kent & Libby purchased their first stalltion, Haydon Rush from Jim Dowling. Haydon Rush in his time was a high goal Polo pony, played by Anto White. Haydon Rush also sired many champion Polo & Polocrosse horses & showed his versatility by siring many sucessful eventers. Unfortunately Haydon Rush sustained a fatal injury in the paddock after his first season at Hawthorne Stud. Fortunately frozen semen had been collected from Haydon Rush and this has lead to the breeding of Hawthorne Maverick, Hawthorne Rush & Hawthorne Eldorado.

Hawthorne Rush is the current sire standing at Hawthorne Stud. He has all the attributes of a successful Polocrosse sire: he is very athletic, will track a ball, mark another horse, has great speed and will keep going with massive endurance. All of Hawthorne Rush’s progeny have great conformation, temperament and agility.

As our children compete, we continue to breed the ideal horses for Polocrosse from the juniors through to the senior competitors.

Hawthorne Stud prides itself & its progeny on performance.

Hawthorne Stud was founded in 1993 and encompasses a progeny that has proven itself at high levels of performance. The stud boasts a unique bloodline of equine athletes that are tailored to suit the Campdraft & Polocrosse disciplines.

Well on the way to achieving its goals, Hawthorne Stud's progeny has received various accolades at a State & National Level on the Polocrosse field and has continued to prove itself on "performance". 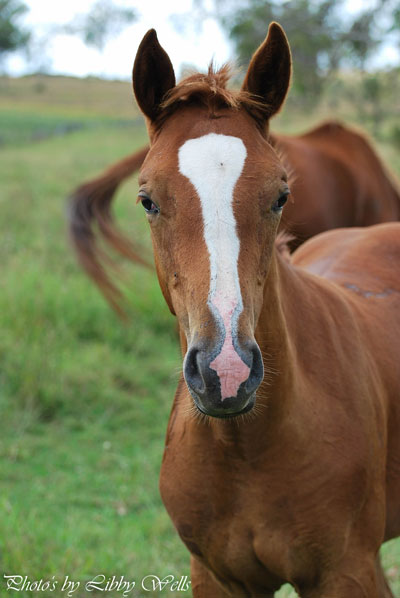